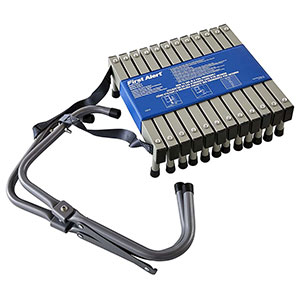 EZ Fire Extinguishing Spray is an incredibly efficient and accurate home safety tool utilized to put out fires. The U.S. Fire Administration has specified that fires can double in size every 30 seconds. It's during this brief window in time that fires can spread and evolve into something life threatening and home ruining. Due to its strength and ease of use, EZ Fire Extinguishing Spray is a powerful and effective solution to implement in any home. It works on household fires including those involving paper, fabric, wood, cooking oils, electrical appliances and equipment. If you're searching for a fire safety product that features all of the strength and none of the bulk of a traditional fire extinguisher then EZ Fire Extinguishing Spray is the fire extinguishing product for you.

Why should I consider First Alert EZ Fire Spray over a traditional fire extingusher?

Traditional fire extinguishers can be bulky and hard to use. The First Alert EZ Fire Extinguisher Aerosol Spray nozzle and compact size make using it intuitive and easy to use.. The spray discharges four times longer than regular extinguishers, helping ensure that nothing reignites. Each can weighs only a pound for easy hold, aim, and spray. The First Alert EZ Fire Extinguisher Aerosol Spray covers up to three times the surface area of a regular actuator, meaning that fires get put out faster. Because the nozzle covers a wide area, the foam fire extinguisher spray can be used to help safely put out a fire, even without perfect aim. The non-rechargeable home fire extinguisher aerosol spray helps to make spaces safer.

Why should I be worried about radon?

Radon is an invisible, odorless and tasteless radioactive gas that is found in the earth’s soil and rocks that contain uranium. Although almost all of the soil in the United States contains uranium, it is usually only found in small amounts. When soil with high concentrations of uranium is located, there is also a noticeable increase in radon levels. From the natural breakdown of uranium comes radium. A radioactive gas (called “radon”) is emitted from radium, which is passed up through the soil.

This gas, in its original form, is inert - it can be breathed in and out again with no harmful effects. However, within thirty minutes of the formation of this gas, its natural decay process begins forming radioactive particles, commonly called “the daughters of radon.” The “daughters” are tiny particles that attach themselves to dust and smoke in the air. Once these “daughters” are breathed into the lungs, they lodge themselves in the walls of the lungs and, because of their natural radioactivity, begin to emit bursts of radiation that can destroy cells in the lungs

What are some of the health risks related to radon? Why should I use a First Alert Radon Test Kit?

The risk of long-term exposure to radon is lung cancer. The Environmental Protection Agency (EPA), an agency of the U.S. government, has estimated that there are between 5,000 and 30,000 radon-related lung cancer deaths each year, and that radon is the #1 cause of lung cancer in non-smokers. Since there are no “symptoms” of lung cancer in the early stages, and there may be a “lag time” of between 10 and 40 years between initial exposure to radon and onset of the disease, there are no clues as to whether or not the “daughters” are destroying cells in your lungs at this very moment. Because radon is invisible, odorless and tasteless, the only way to evaluate whether or not you face the risk of radon exposure is to test your home for radon.

Is there anything I should know about using an escape ladder?

FirstAlertStore.com is operated by eAccess Solutions, Inc., under license by First Alert. © 2022 All Rights Reserved.

Product filters are being applied...

Sorry, no products were found matching your search criteria. Please update your selections or use the clear all selections button below to view all products in this category.