What should I know about smoke alarms?

The installation of a functioning smoke alarm is the first line of defense in alerting you and your surroundings to the many dangers associated with a fire. First Alert Smoke and Fire Alarms provide reliable protection you can trust to help protect what matters most. Do you know how many smoke detectors your home needs to be fully protected and what type is best suited for your needs? We’re here to help you with these questions and more.

Where should I install smoke alarms?

According to the National Fire Protection Association (NFPA), smoke detectors should be installed on every level of your home, in every bedroom, and outside every sleeping area. To help avoid nuisance alarms, smoke detectors should be installed at least 10 ft. away from cooking appliances. When installing a smoke alarm, place the detector on the ceiling or high on the wall. This will allow for the best result as smoke rises. When installing a smoke alarm high on the wall, it should not be placed more than 12 in. from the ceiling. You’ll also want to avoid installing smoke detectors near windows or air ducts, as this could interfere with their performance. How many smoke alarms do I need in my home?

Fire detectors should also be installed inside of every bedroom and outside of each sleeping area. For example, a two-story home with three bedrooms should have at least seven smoke alarms. Homes that have a set number of hardwired alarms can still have additional battery operated smoke alarms throughout the house. There is no such thing as having too many smoke alarms in your home! Just make sure fire detectors are properly placed in each area. 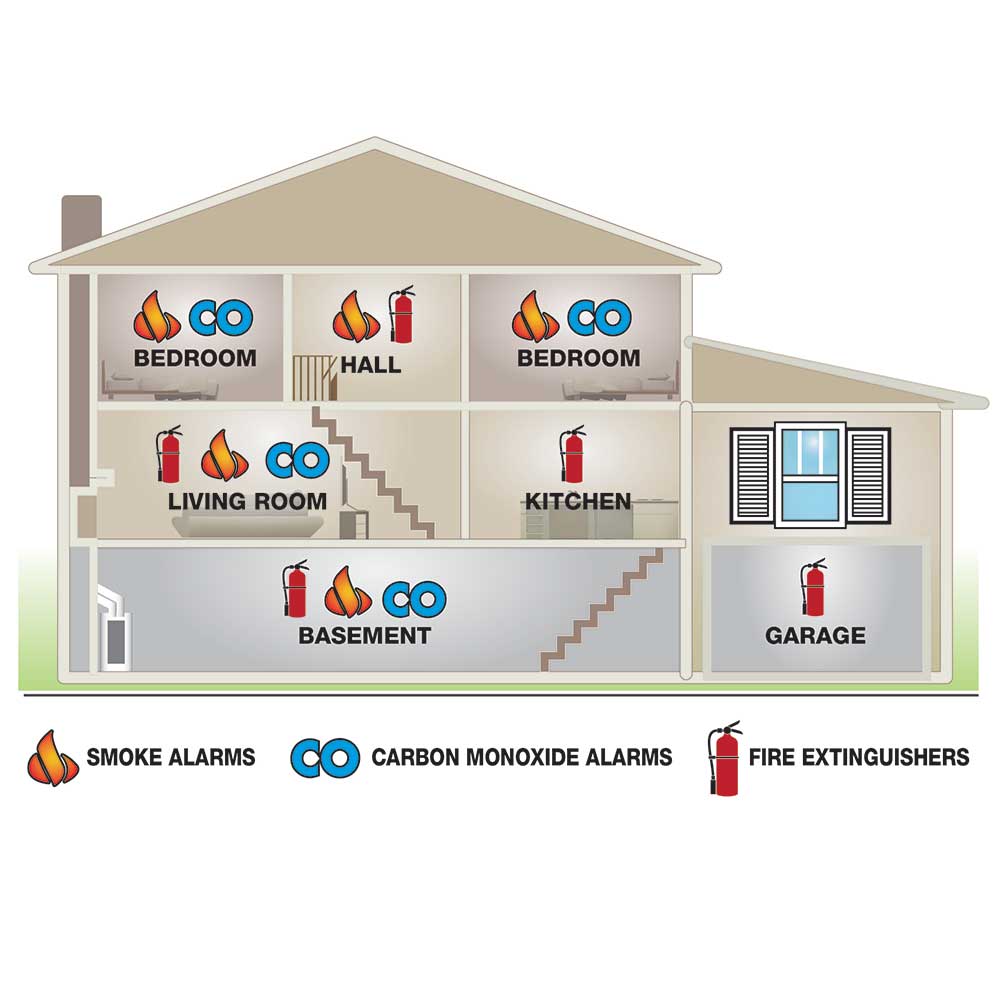 How often should I replace my smoke alarms?

Smoke alarms should be replaced every ten years. Every smoke alarm in your home has an expiration date. It’s something that all homeowners should be aware of as smoke and fire protection is only available with an active alarm. If you’re unsure of the time remaining on your smoke alarm, there’s an easy way to check its viability. Most smoke detectors will feature a manufacturer date printed on the back of the alarm. If it’s more than 10 years old, it’s time to replace the smoke detector. The same applies to carbon monoxide alarms. It should be noted that most co alarms expire after 7 years.

Why does my smoke alarm randomly chirp?

There can be a few factors at play here. A low battery can be responsible as the smoke detector is alerting you that it’s time for a replacement. It can also be caused by batteries being placed incorrectly in the alarm. Another common reason is when the battery drawer is left slightly open. Similarly, a battery pull-tab that’s still in place can be causing the disruption. The chirping can also be caused by pressing the silence button by mistake. This will cause your smoke alarm to chirp once a minute for up to 15 minutes before resetting.

If you feel like you are getting a false alarm from your smoke alarm (not a low battery chirp) often, please review the following known reasons:

Why doesn't my smoke alarm sound when I push the test button?

Why does my smoke alarm go off when I install a battery or turn on the AC power?

It is normal for smoke alarms to go off and sound briefly (up to 5-10 seconds) when you install a new battery or when they are powered up. If the alarm continues to go off and no smoke is present, the cause may be one of the following:

My smoke alarm keeps chirping, even with a new battery. What is causing this?

There are a number of possible causes for your smoke alarm to keep chirping even with a new battery.

I'm ready to change my smoke alarm battery - what replacement batteries can I use?

Check your User's Manual or the nameplate on the back of the alarm. Different smoke detectors use different kinds of batteries - 9V, AA, AAA - it all depends on the particular model you have. Use quality batteries like lithium smoke detector batteries - having plenty of power is worth any extra cost. Never use rechargeable batteries because they may not always provide a consistent charge.

How often should I test my smoke alarms?

Your units should be tested once per week, when possible. Regular testing with the "Test" button helps ensure that your alarm has a reliable power source. The test button is usually located on the side or top of your unit. Refer to your user's manual for full instructions.

What is the difference between ionization and photoelectric smoke alarms?

Ionization Smoke Detectors feature an ionization sensor that provides the earliest possible warning to fast flaming fires. Ionization sensors are optimized to detect fast flaming fires that can be caused by paper, kitchen grease and other fast-combusting materials. Photoelectric Smoke Detectors come equipped with a photoelectric sensor that reliably detects smoke produced by smoldering fires. Photoelectric sensors are optimized to detect larger smoke particles created by smoldering fires such as those caused by unextinguished cigarettes.

What are dual sensor smoke alarms?

Dual sensor smoke alarms excel at detecting the presence of both smoldering and fast-flaming fires, ensuring optimal levels in peace of mind. Both sensors work together to provide complete smoke and fire detection.

Why should I choose a hardwired smoke alarm?

Hardwired Smoke Detectors are easy to setup as they plug into your home’s preexisting system. All First Alert Hardwired Smoke Alarms come equipped with a battery backup that will continue to operate in the event of a power outage. The added ability to interconnect hardwired smoke detectors to one another adds multiple avenues to explore when creating a personalized smoke, fire and carbon monoxide defense system.

Why should I choose a battery operated smoke alarm?

Battery Powered Smoke Detectors bypass the installation requirements of hardwired smoke alarms in favor of a swift and altogether simple process. Simply choose an appropriate area in your home that requires a smoke alarm, mount it to the wall or ceiling and check the smoke detector’s function via its test button. A majority of First Alert Battery Operated Smoke Alarms comes equipped with a 10 year battery, ensuring a decade’s worth of uninterrupted operation.

What are wireless interconnect smoke alarms?

When seconds are vital in safely escaping in the event of an emergency, you’ll need a smoke and fire defense system that’s capable of alerting the entire home. First Alert Wireless Interconnect Smoke Alarms remove the limitations of a standard smoke detector by being able to link with one another. There’s a lot of inherent flexibility on display here as interconnected smoke alarms will allow homeowners to create a personalized smoke and fire defense system that’s unique to their home. We mentioned the possibility of not being able to hear a basic smoke detector sound off in opposing locations in a home. It’s a doubt that’s removed completely here as interconnected smoke detectors will sound off in unison when triggered. An interconnected smoke alarm that detects smoke in the basement will alert all other linked devices in the home. 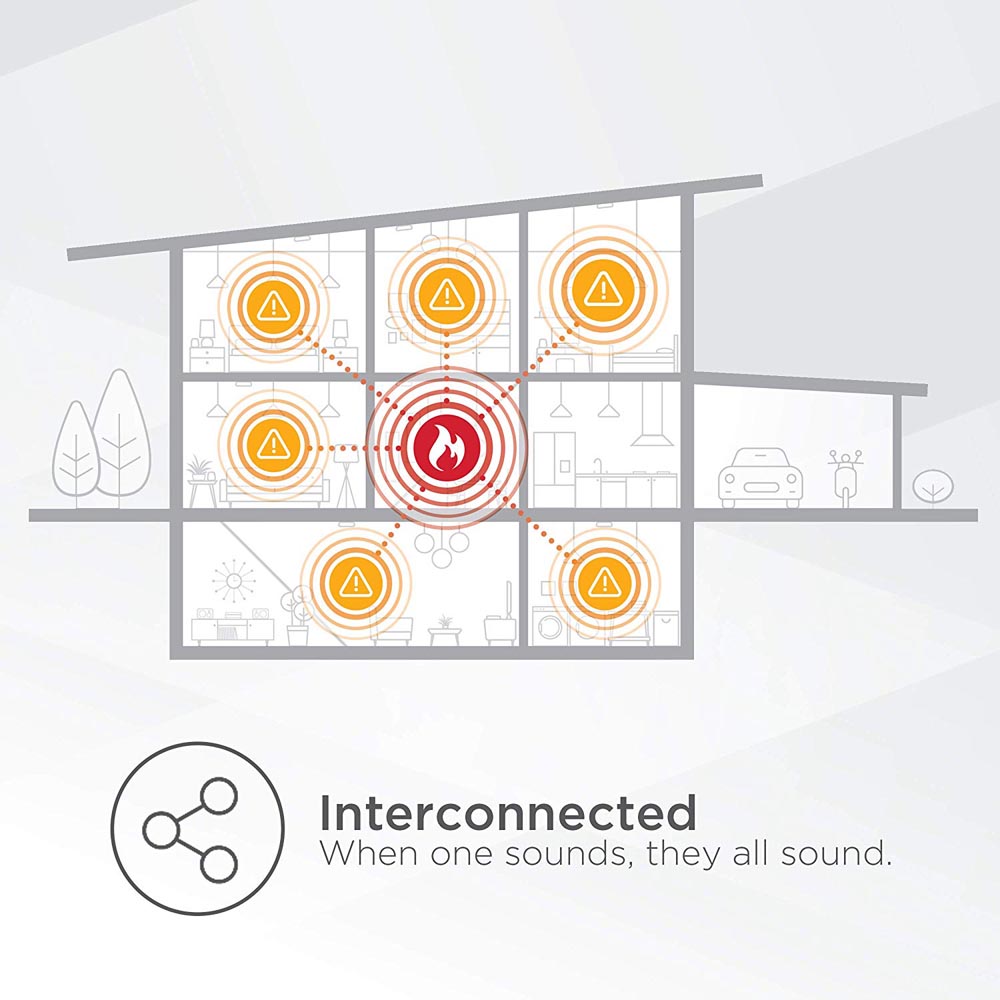 How many First Alert Wireless Interconnect Alarms can I link together?

You’ll be able to interconnect up to 16 compatible First Alert Wireless Alarms together. This should be more than enough to create a custom smoke, fire and carbon monoxide defense suited specifically for your hom

I lost my First Alert Smoke Alarm Owner's Manual. How can I get a new one?

First Alert smoke alarm owner's manuals are available online for download at no cost. Find your alarm in our Smoke Alarms section.

The following is a collection of First Alert Smoke Alarms and Detectors that are readily available for purchase here at the First Alert Store:

This First Alert Hardwired Smoke Alarm wires directly into your home's electrical system.This hardwired smoke detector uses an ionization smoke sensor to reliably detect smoke from hot, fast-flaming fires. This alarm comes equipped with a battery backup and a mute button. You won't ever have to worry about alarm failure due to a power outage. The built-in battery provides assurance of maximum coverage. This unit also features the easily accessible battery door and convenient mute feature.

This is the right smoke alarm for you if:

First Alert Combination Alarms provide an excellent means of reaching smoke and carbon monoxide protection with one installation. This combo alarm can be interconnected with other alarms, allowing you to create a personal smoke, fire and carbon monoxide defense system unique to your home. Equipped with a 9V battery backup, this hardwired combination alarm will continue to operate in the event of a power outage. Using an ionization sensor

This is the right combination alarm for you if:

Dual Ionization & Smoke Alarms are the only smoke detectors to feature both an Ionization and Photoelectric Sensor! Dual Alarms provide excellent protection from both slow and rapid fires alike. Dual-Sensor Smoke and Fire Alarm provides early warning of both flaming and smoldering fires. Additionally, its intelligent sensing technology is designed to cut down on nuisance alarms from cooking smoke or other common false-alarm triggers. A single button both silences and tests the smoke detector for simple operation. The battery-powered fire detector can be easily installed anywhere without wires.

This is the right alarm for you if:

Equipped with a 10 year lithium battery backup, this hardwired smoke alarm uses an ionization sensor to quickly detect the presence of fast flaming fires. This ionization smoke alarm also uses Smart Technology that will drastically reduce the number of nuisance alarms triggered. In addition to functioning independently, this smoke and fire detector can also integrate with up to 12 other First Alert or BRK hardwired alarms for increased coverage. Connect with other smoke,  carbon monoxide and combination alarms for improved peace of mind.

This is the right smoke alarm for you if:

The First Alert PRC710 Slim Photoelectric Smoke and Carbon Monoxide Alarm with 10-Year Battery helps protect your home from two potentially deadly threats by providing up to a decade of uninterrupted monitoring. Equipped with dual sensors, this low-profile alarm detects smoke from slow-burning, smoldering fires. Half as thick as a standard alarm, this detector has a slim, contemporary design that mounts unobtrusively on a wall or ceiling. A built-in 10-year lithium-ion battery provides continuous power, with no need to ever worry about changing the battery during the lifetime of the alarm.

This smoke and CO detector is for you if:

The latest advancement in a series celebrated for its intuitive use of technology, First Alert Wireless Interconnect Detectors offer an plenty of options when it comes to creating the ideal safety network. Wirelessly inter-connectivity allows you to connect up to 16 alarms within your home. Voice can easily be programmed for alarm's location within your home. (this feature comes with 11 pre-programmed choices) Voice also notifies which hazard is being detected. If the alarm set in your kitchen senses smoke, all of your First Alert Wireless Interconnect alarms will announce: 'Warning, evacuate! Smoke in the Kitchen!'

This smoke & fire alarm is for you if:

These are the standard Smoke Alarms found all over the country and feature an Ionization Smoke Sensor. Additions include: Battery Operation, Mute Button and Test Function. These are often utilized for their reliability.

This is the right alarm for you if:

This Smoke Alarm comes equipped with a light to assist you in escaping a fire. The presence of Heavy Smoke often carries the threat of reducing your visibility. The addition of a light is perfect for revealing your path of escape.

This is the right smoke detector for you if:

FirstAlertStore.com is operated by eAccess Solutions, Inc., under license by First Alert. © 2022 All Rights Reserved.